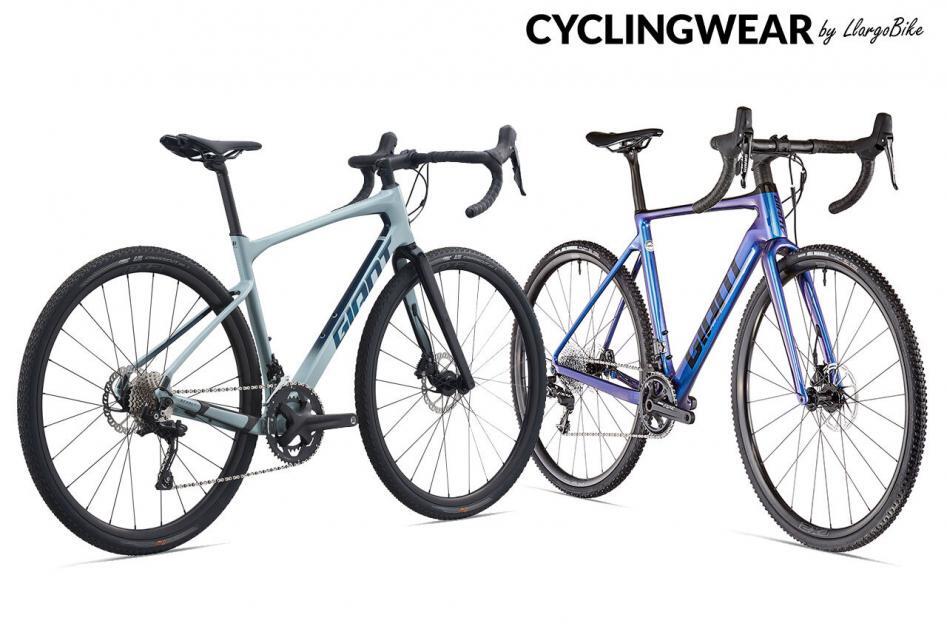 Much has been said these years about the «new» discipline of Gravel, a real sales furor that has displaced another old modality, less known to the general public: Cyclocross. Is Gravel a Marketing Invention? Are their differences so great that it is really necessary to create another range of bicycles? Are cyclocross bikes going to disappear? Which one do I buy?

We will try to answer all these questions, which are sure to be around many heads, in this article, comparing two magnificent exponents of both disciplines of the Taiwanese manufacturer Giant: TCX vs Revolt, both in the cheapest versions for sale in Spain of the Advanced finish, authentic super sales. But first, a little historical introduction.

The origin of Cyclocross

Although its beginnings are uncertain, probably before 1900, it is in 1950 when the first UCI Cyclo-cross World Championship is contested. This discipline, which has always gone hand in hand with road cycling, is usually held in the autumn and winter months, when the road racing season ends. It consits in a race for laps on short circuits, usually with mud, ice, snow and multiple obstacles, which often involve «carrying the bike on your shoulder.» 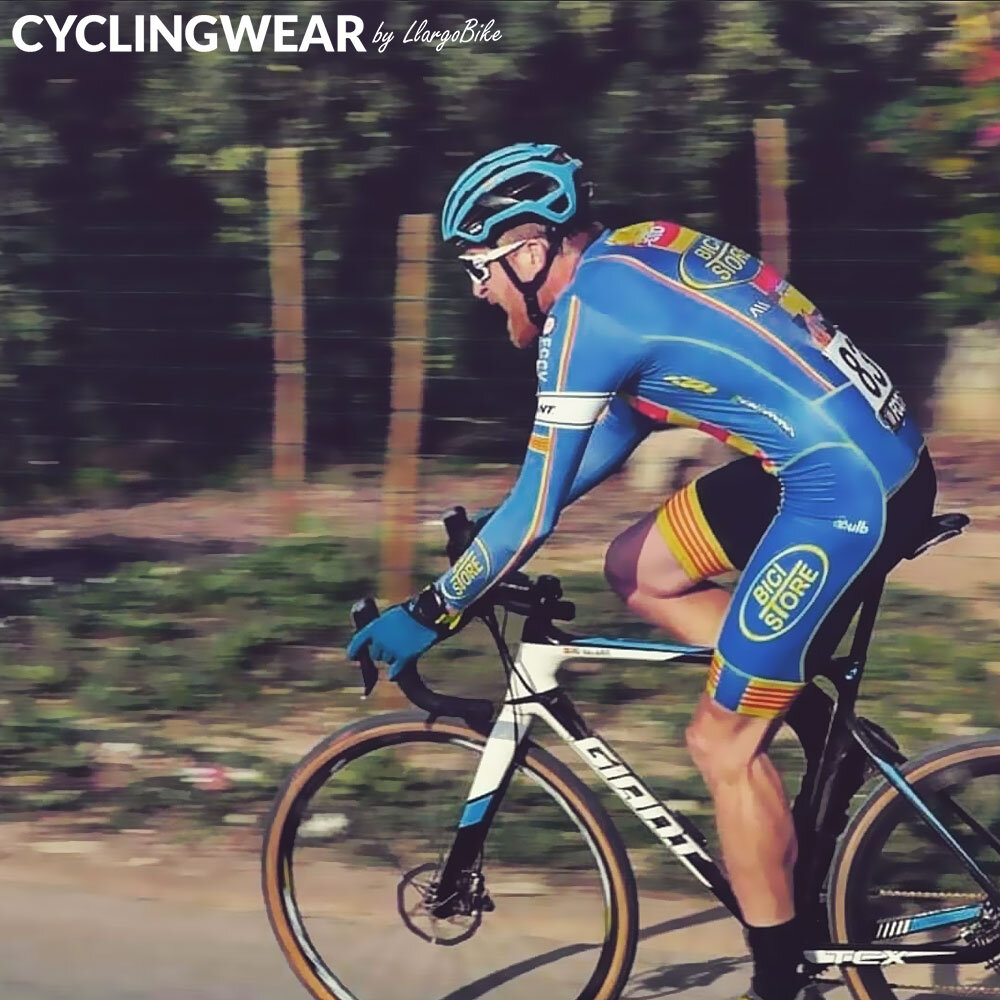 The similarity of cyclocross bikes to road bikes is palpable, they are practically of the same geometry, differing only by the tyre clearance, to accommodate wider all-terrain ones and a higher bottom bracket, to better overcome obstacles. Little more. In the photo, the Giant TCX Advanced Pro 2 2021: 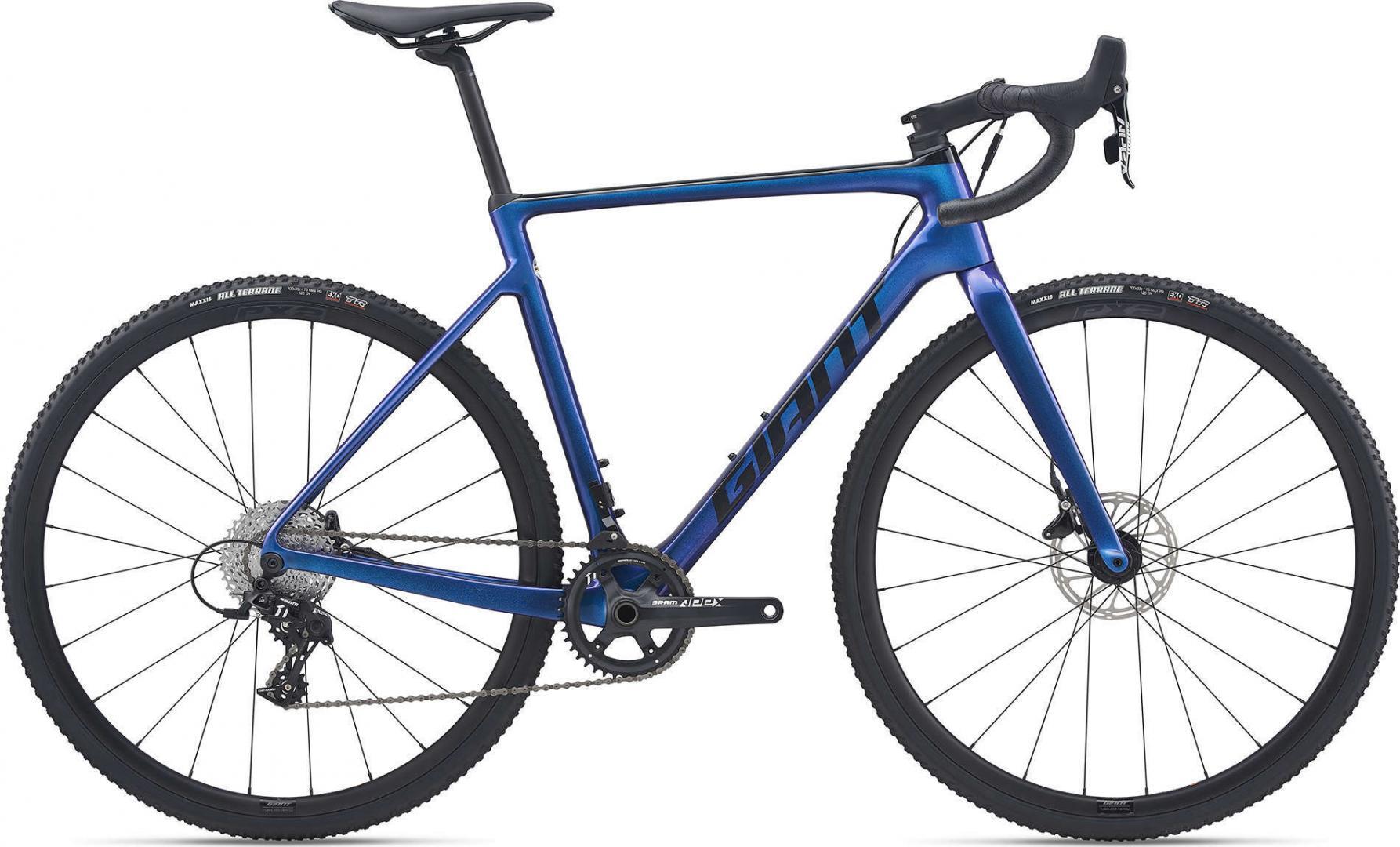 Although very fashionable today, the Gravel is an old acquaintance. We can almost say that as much as mountain biking. Since the 80-90s, especially in the USA, there are records of cyclists who modified their road bikes to adapt them to driving on dirt roads, due to the scarce existence of asphalt roads in rural regions. It wasn’t until the first decade of the 2000s that the discipline became super popular in America. The funny thing is that in recent years, the majority of generalist manufacturers have entered the Gravel forcefully, creating ranges and specific lines of bicycles, which has opened their market to the general public. 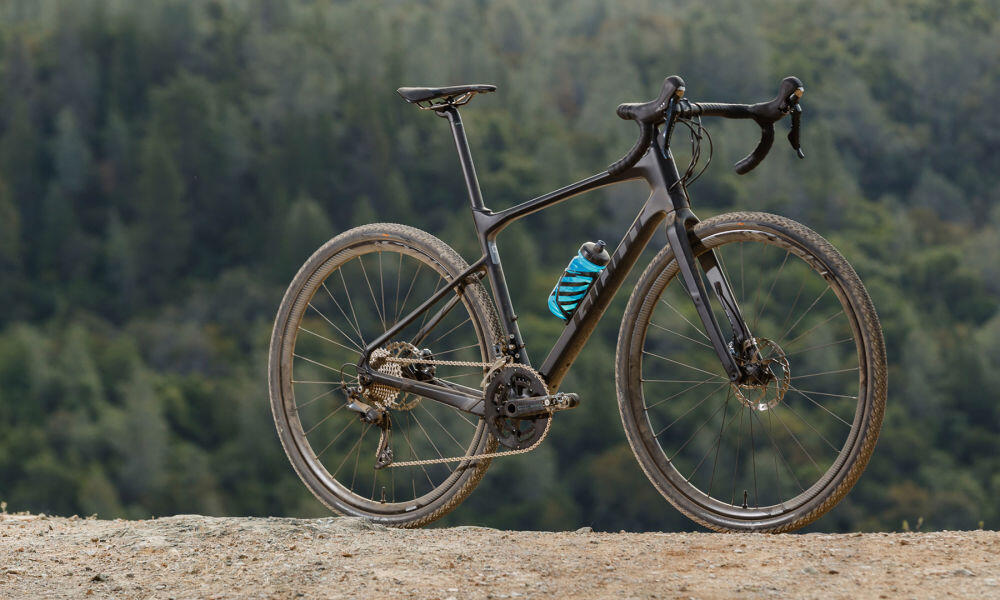 The Gravel bike is practically like a Cyclocross bike, but with certain changes that make it more comfortable and not so competitive. Here it is not about fighting against the clock, but about pedaling relaxed and enjoying the environment, therefore, the driving position is usually more upright, with a higher specific handlebar, and even wider tires, which provide a plus of absorption. The bottom bracket is usually lower to provide greater stability and control and the sloping of the frame (short seat tube that lowers the horizontal tube of the frame diagonally) is more marked, since it is not necessary to carry the bike on your shoulder. In the photo, the Giant Revolt Advanced 3 2021: 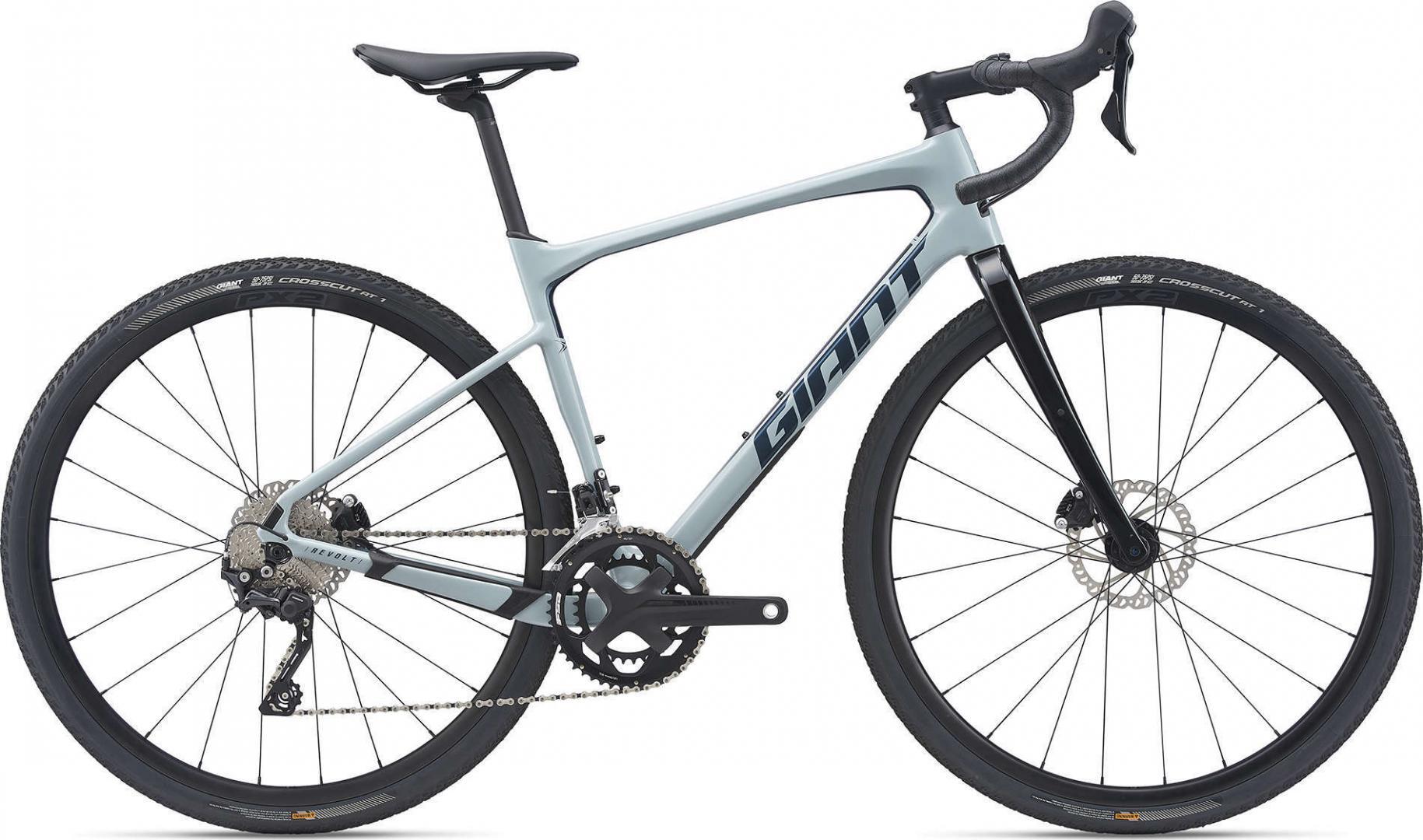 Presented both modalities, let’s see in detail what the TCX and Revolt can do for lovers of mixed roads.

The TCX is a great classic in the Giant range, it has been with us for many years, practically as many as the famous TCR model for road, but in this case it is aimed entirely to the small cyclocross audience. We say small, but no less demanding, cause the cyclocross cyclist’s profile is very competitive, high-performance amateurs and professionals, who hang the road bike in autumn, to take the CX bike and squeeze it at the highest level. 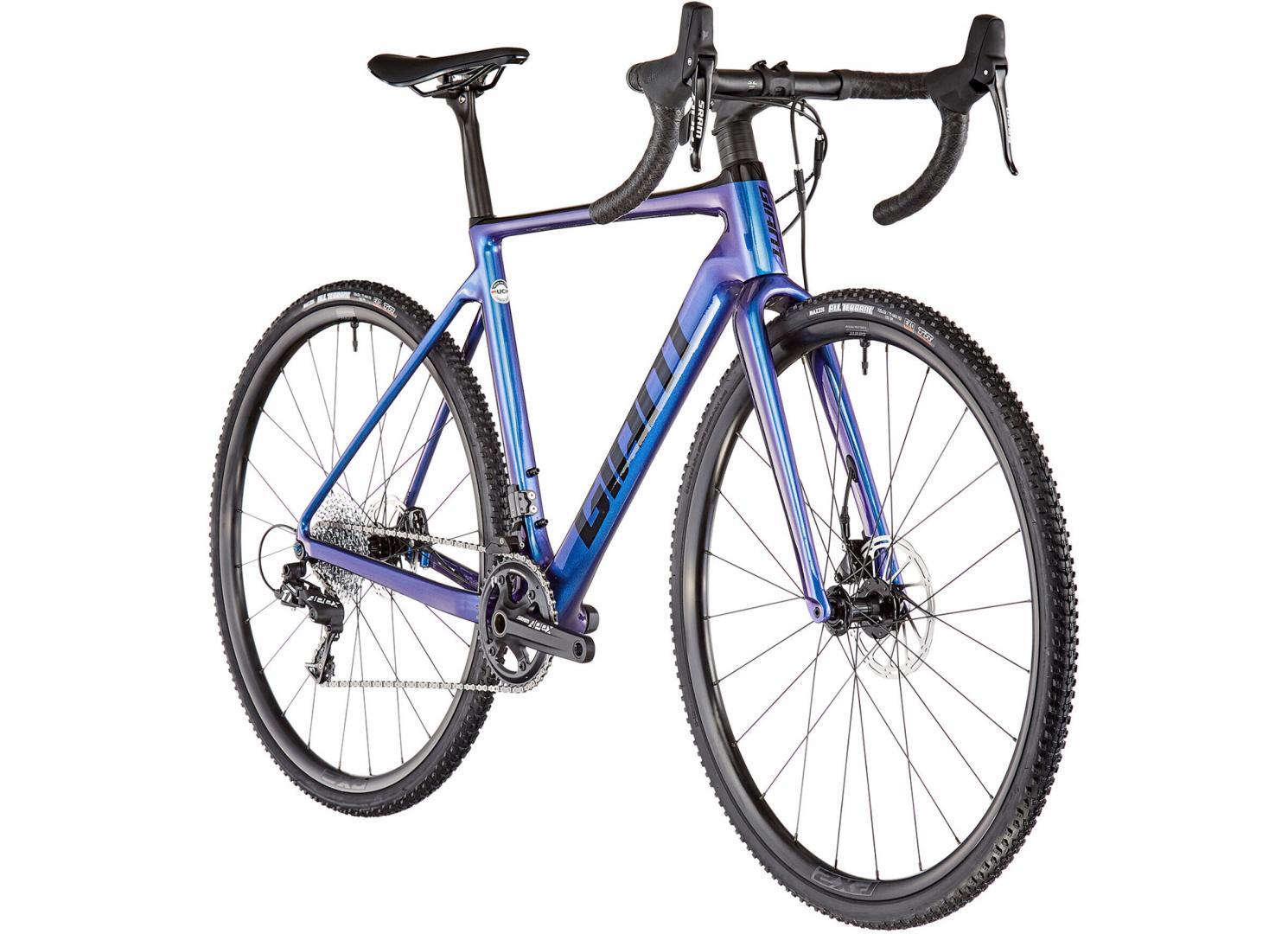 The light frame-fork combination together with a single chainring makes for a terribly light bike, at the level of road bikes.

Riding a single chainring is common in Cyclocross, because of the short and buzzing circuits where you race, but for an all-purpose bike with Gravel aspirations, it may be limiting due to the 40-36 range. Although this is easily remedied by swapping the cassette for an 11-42, the maximum that the SRAM Apex rear derailleur can support. As positive points, in addition to the aforementioned lightness, the single chainring transmission provides us comfort, safety and cleanliness. We do not have chain jumps, we do not have to shift front gears, the aesthetics of the bike looks very clean …

The tubeless tires are perfect for the use, but we would increase the width to 38c-40c if we are going to abuse of Gravel roads. They can be up to 45c.

A few brushstrokes of geometry

In size M-L we have:

Later we will compare these measurements with the Revolt, to be clear about their differences.

Giant launched its Gravel Revolt in late 2018 in response to growing market demand. The result was an instant hit, with deliveries completely sold out by many stores you visited. A first look at its aesthetics leaves us with the feeling of being in front of a rigid mountain bike with road handlebars and narrow tires, and it is undoubtedly what it seems, due to its low sloping. 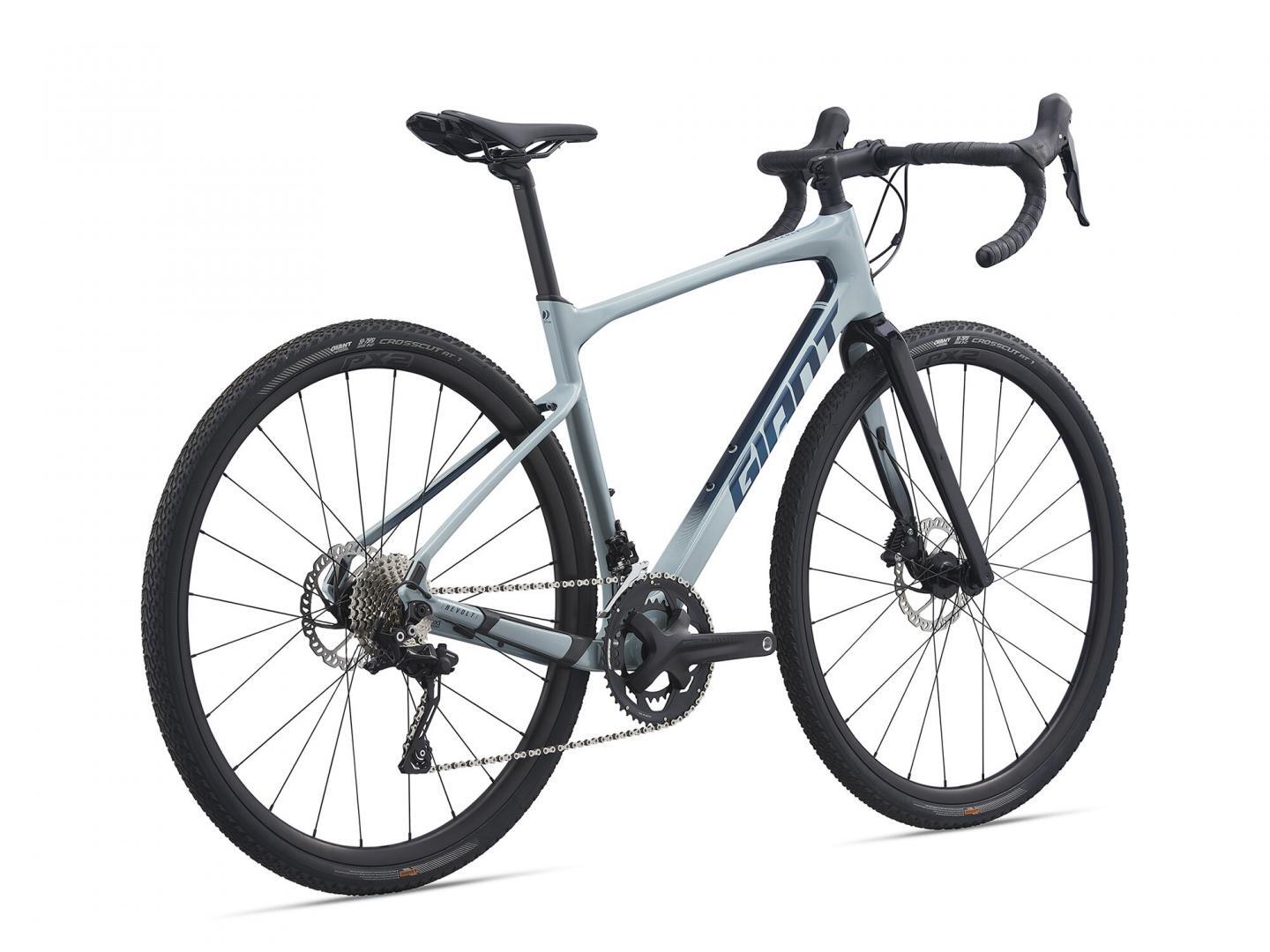 Yes, it is € 550 cheaper than the TCX. The Revolt 2 (9.4 kg of total weight) costs € 2,699, which would be the price more equivalent to the TCX in the article, but we want to compare the cheaper versions of their ranges.

The frame is not so light (400 g more), since it has more robust and oversized finishes, although the carbon is the same. Also the use of 2 chainrings, other components and wider tires increases the final weight by more than a kilo and a half.

The Shimano GRX transmission with 2 chainrings opens the range of gears much more, at the cost of greater complexity, discomfort and possible chain jumps.

The rims are exactly the same, but with wider tubeless tires.

A few brushstrokes of geometry

In size M-L we have:

You’d expect a more «chill» geometry on the Revolt, and it is, but don’t think it differs dramatically from the TCX. In this composition we have placed the same saddle height on both bikes (the Revolt catalog photo takes it lower) and handlebars: 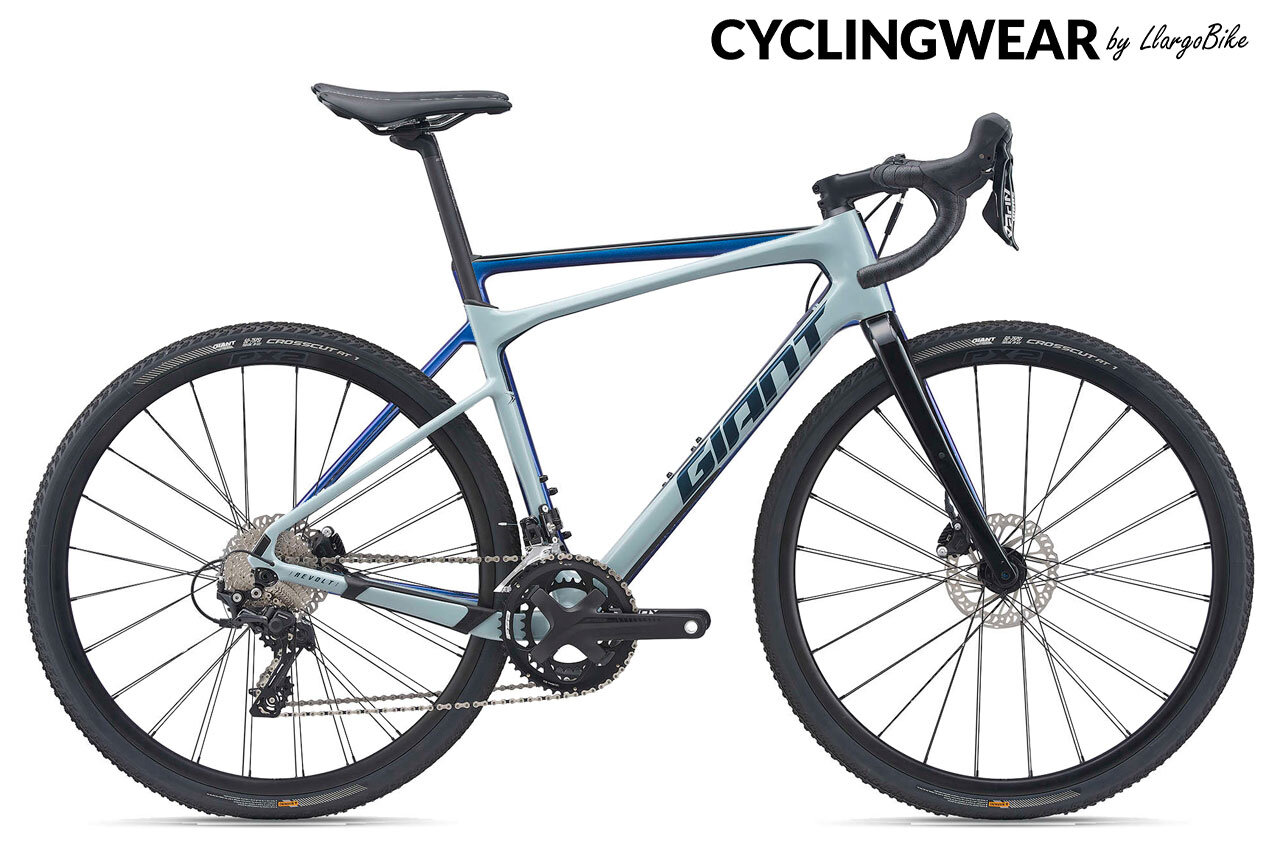 As you can see with the naked eye, the differences are minimal, and what stands out the most is the Revolt’s pronounced sloping, which will force us to take out the seat tube more, and its bottom bracket height, lower. The width of the pipe is also a bit larger, but compensable with the spacers.

If you want more specific data, we see them below.

The top tube is only half a cm longer, which together with a head tube with a more relaxed 1º angle, leaves us with a reach (distance from the vertical of the bottom bracket to the center of the stem) exactly the same as the TCX. The Stack (distance between the horizontal of the bottom bracket and the center of the stem) is increased on the Revolt by 1.6 cm, which raises the stem a bit, to make it more roadworthy: 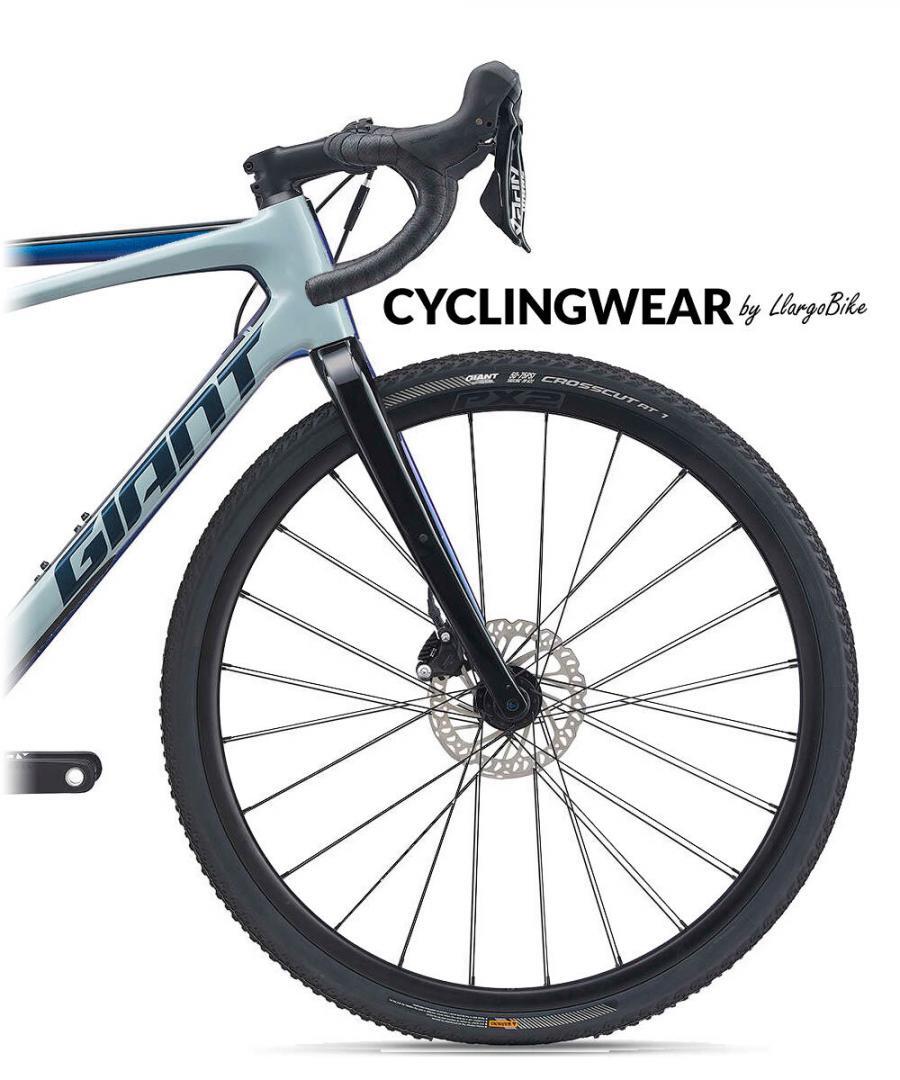 Both models share the same saddle angle: 73º. The wheelbase grows by 6 mm, practically negligible and the chainstays are half a cm shorter in Revolt: 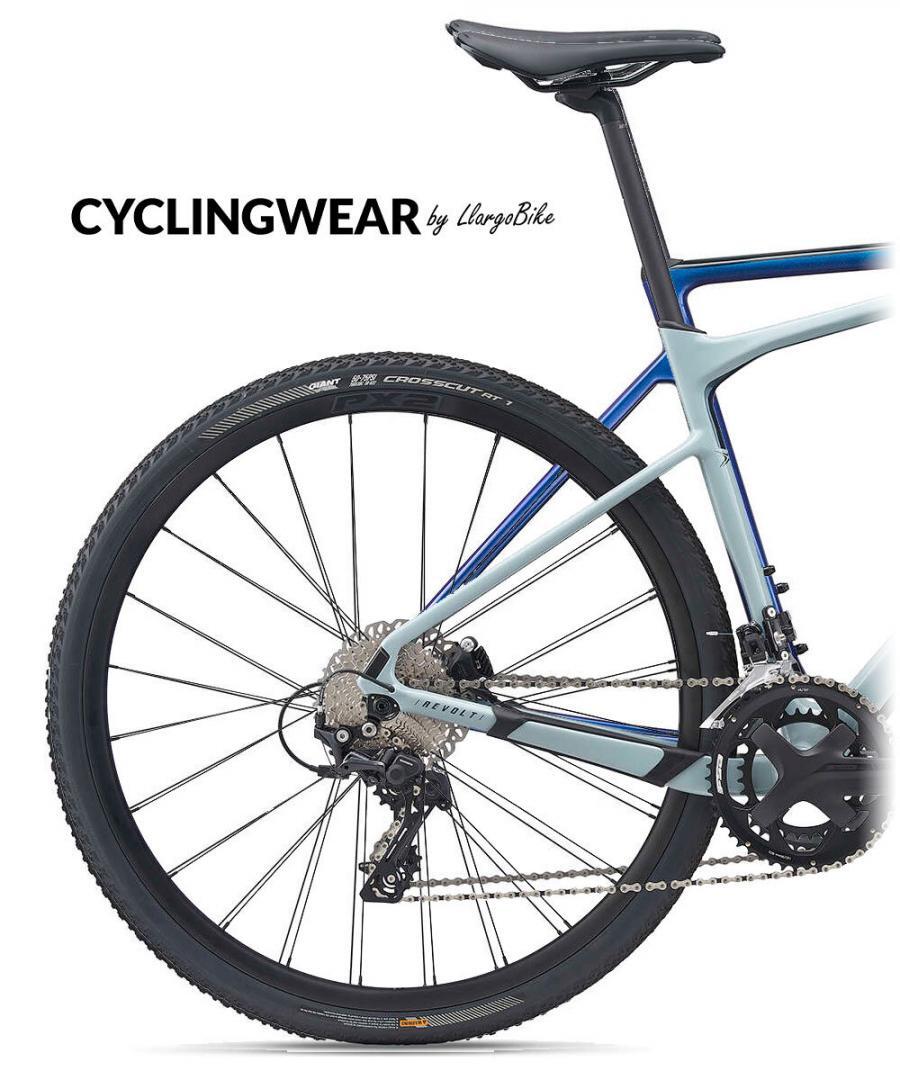 The geometric differences are very small between the two bikes. Unless we place the Revolt handlebars higher, our back will be just as upright as on the TCX. In other words: using spacers, we can place the handlebar on the TCX at an equally relaxed height as on the Revolt.

On the Revolt, the degree of difference in the angle of the fork and the extra half centimeter of the top tube increases the wheelbase a bit, even though it has shorter chainstays. This coupled with a lower bottom bracket will make the bike more stable and less nervous, but we find it difficult to appreciate with such a subtle difference.

The wider tires and the «more gravel» handlebars of the Revolt will also make the bike more all-terrain, but they are easily equalized between both bikes, in addition to having exactly the same tires.

Where we may have «more problems» is with the TCX single chainring. If we want to climb hard, moving a 40-36 ratio will be difficult, but we have already mentioned that we can change the cassette up to an 11-42, maybe more.

And we cannot forget the weight, the TCX is much lighter, which makes it a true ground-to-ground missile, with incredible agility. 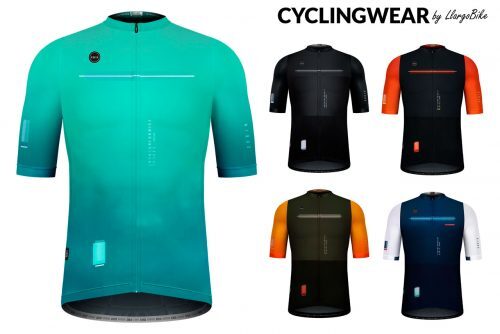 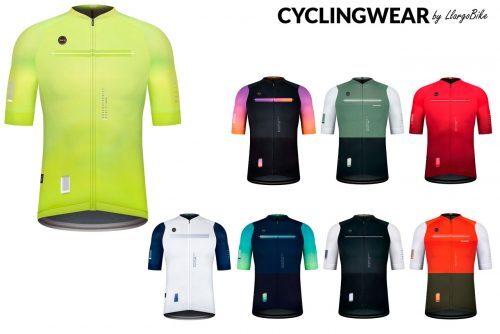 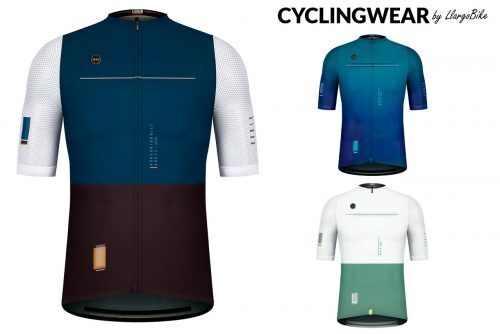 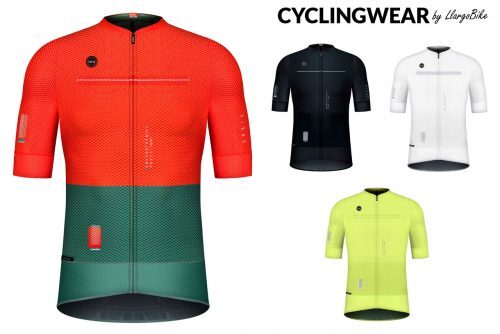